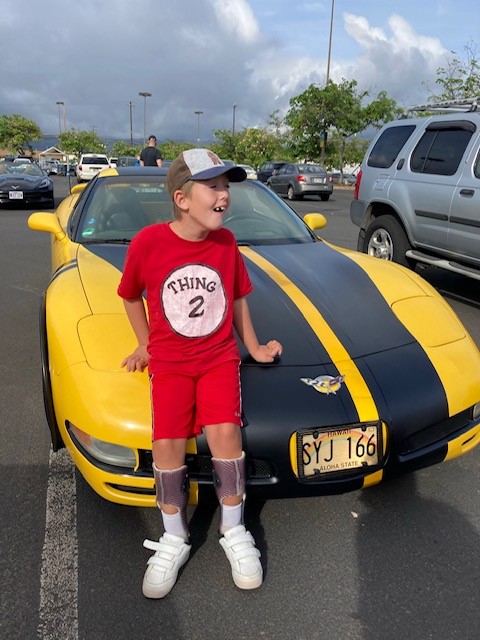 Benji loves wrestling with his father and playing with his best friends Asher and Shayla. He and his little sister, Emily, vie for seat position in the grocery cart at the local market. He is quite fond of elevators – both watching them and riding in them. Benji is a happy kid.

He is also a rare kid, and lives with NGLY1 deficiency.

NGLY1 deficiency is a complex neurological syndrome resulting from a shortage of the enzyme N-glycanase 1. This enzyme helps in the removal of abnormal proteins from the body in a process called deglycosylation. Every part of the body requires this process to function normally. Symptoms and severity of NGLY1 deficiency can vary dramatically and include developmental delays, movement disorder, weak muscle tone, liver abnormalities, seizures and an inability to produce tears.

Like most paths to rare disease diagnosis, Benji’s did not come swiftly or easily. He was born in Missouri prematurely in September 2011 at 4.5 pounds but was able to skip the NICU and head home. At around 3 months, Benji’s mother Eileen remembers, “I had a mommy hunch that something was not right.”

At 9 months old, Benji had his first seizure. From there, the seizures became worse until he was having hundreds of them a day. Pages of genetic tests revealed nothing, and seizure medications were ineffective. In this period, little Benji was admitted to the hospital 40 times.

Benji and the family caught a bit of a break when a neurologist at St. Louis Children’s Hospital started him on adrenocorticotropic hormone or ACTH. The seizures stopped after the second injection. ACTH promotes the release of adrenal steroids; a common side effect of steroids is hunger. Around 10 months old, Benji began gaining 5 pounds a week.

Then a new hurdle came. Benji’s gastroenterologist noticed elevated levels of alpha fetoprotein, an indicator for liver cancer. Sure enough, Benji had a giant tumor in his liver, and he began chemotherapy.

A liver transplant came next when Benji was just shy of 2 years old.

“After the transplant, he was a completely different child,” marveled Eileen. He sat up, smiling and happy, and was then up for 12 hours at a time. He had never been awake that long before. “This was a kid I didn’t know.”

Two months later, he had surgery to correct his Achilles tendons which had tightened from lack of use. The next day, he stood up for the first time, ever.

In November of 2014, Benji’s parents finally learned what their son’s condition was: NGLY1 deficiency. Eileen paraphrases the conversation with the geneticist like this:

“He’s the dad of patient zero, and he knows more about the disease than anyone.”

“Welcome to the family,” he said. They talked for two hours.

Benji is patient number 17. That is, the seventeenth person on earth diagnosed with NGLY1 deficiency. The first person was Bertrand Might, Matt’s son. Bertrand’s family moved heaven and earth to identify this disorder caused by a single gene mutation, and to find treatments for it. The Travere team and so many in the rare disease community mourn the loss of Bertrand who died in 2020 after years of bringing smiles and joy to those who knew him.

Armed with a diagnosis, Benji’s family joined a gathering of families touched by NGLY1 deficiency in 2016 at Sanford Burnham Prebys Medical Discovery Institute. Physical therapy students played with the kids while the parents and caregivers went to meetings to learn about research, advocacy and support. “There were 5 or 6 little boys with NGLY1,” Eileen recounted, “and they ran those PTs ragged going up and down ramps and elevators.”

Today at the age of nine, 8 years after his liver transplant and 7 years after diagnosis, he’s walking in a walker, riding his tricycle, and doing great at Kailua Elementary. He wears ankle-foot orthotics (AFOs) for stability and loves the elevators in the 17-floor hospital of Oahu, Hawaii, the family’s new home. Benji is nonverbal and uses AAC technology (augmentative and alternative communication) to tell his family he loves them, that he wants a hug, to talk with his friends, or fight with his sister.

Benji is a rare kid who is just like other kids. Keep an eye out in the elevators of Oahu – you may just run into his smiling face.

For more information about NGLY1 deficiency and other congenital disorders of glycoslylation and deglycoslyation, visit CDGCARE.org.