Baby Delila lives in the southeast corner of Washington state with her parents and two older sisters. Delila loves to be held, talked to, and she also likes to be tickled.

In June 2020, Delila’s mom Valarie went for a regular prenatal 32-week checkup. The ultrasound revealed anomalies with the baby’s heart.

“That was very hard to hear,” said Valarie.

More testing showed that the right side of Delila’s heart was hypoplastic – smaller than the left side. Delivery would now take place at a maternal-fetal hospital up in Spokane two weeks earlier than planned.

Valarie spent many anxious hours googling before the delivery day. Her doctors ran genetic tests which ruled out Down syndrome, DiGeorge syndrome, and other conditions associated with congenital heart disease.

When Delila was born, she was taken to the NICU where she spent her first week with cardiologists determining exactly what issues she had with her heart.

“She was doing great, didn’t need oxygen or special medications, and we were getting ready to be released,” Valarie shook her head as she remembered. “Then the gastroenterologist came.” 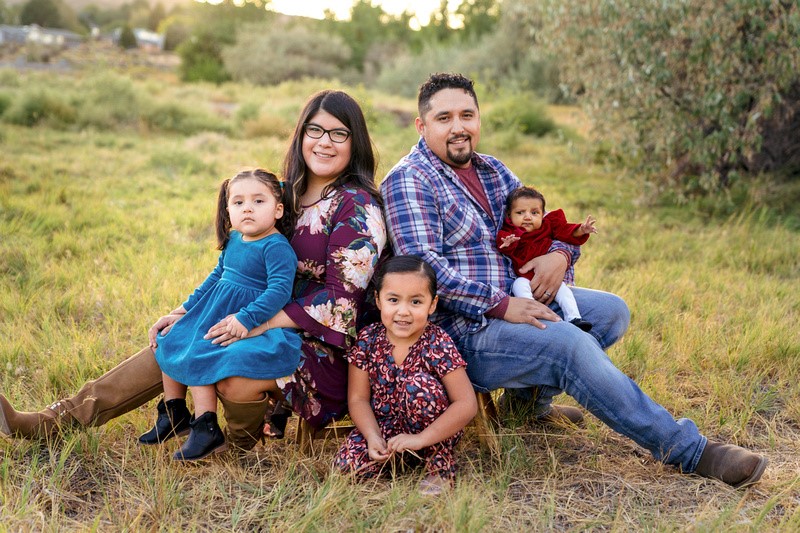 A little blood in her stool led to a HIDA scan (cholescintigraphy) of her gallbladder and a liver biopsy, revealing that she had very few and very small bile ducts. Piecing together the signs – Delila’s jaundice, rising bilirubin levels and butterfly-shaped vertebrae – the gastroenterologist deduced that she had Alagille syndrome. Delila stayed another 5 weeks in the NICU so that her liver and heart could be monitored. Meanwhile, Valarie and her husband drove back and forth to Spokane every 48 hours, balancing caring for their other two daughters (age 2 and 4 at the time).

Born July 28, Delila arrived home from the hospital on August 29. In mid-October, the test results came back confirming the JAG1 gene mutation for Alagille syndrome.

Heart abnormalities are common in people with Alagille syndrome. Delila has multiple major aortopulmonary collateral arteries, or MAPCAs, which pump blood to the lungs directly off the aorta to compensate for underdeveloped and missing pulmonary arteries. 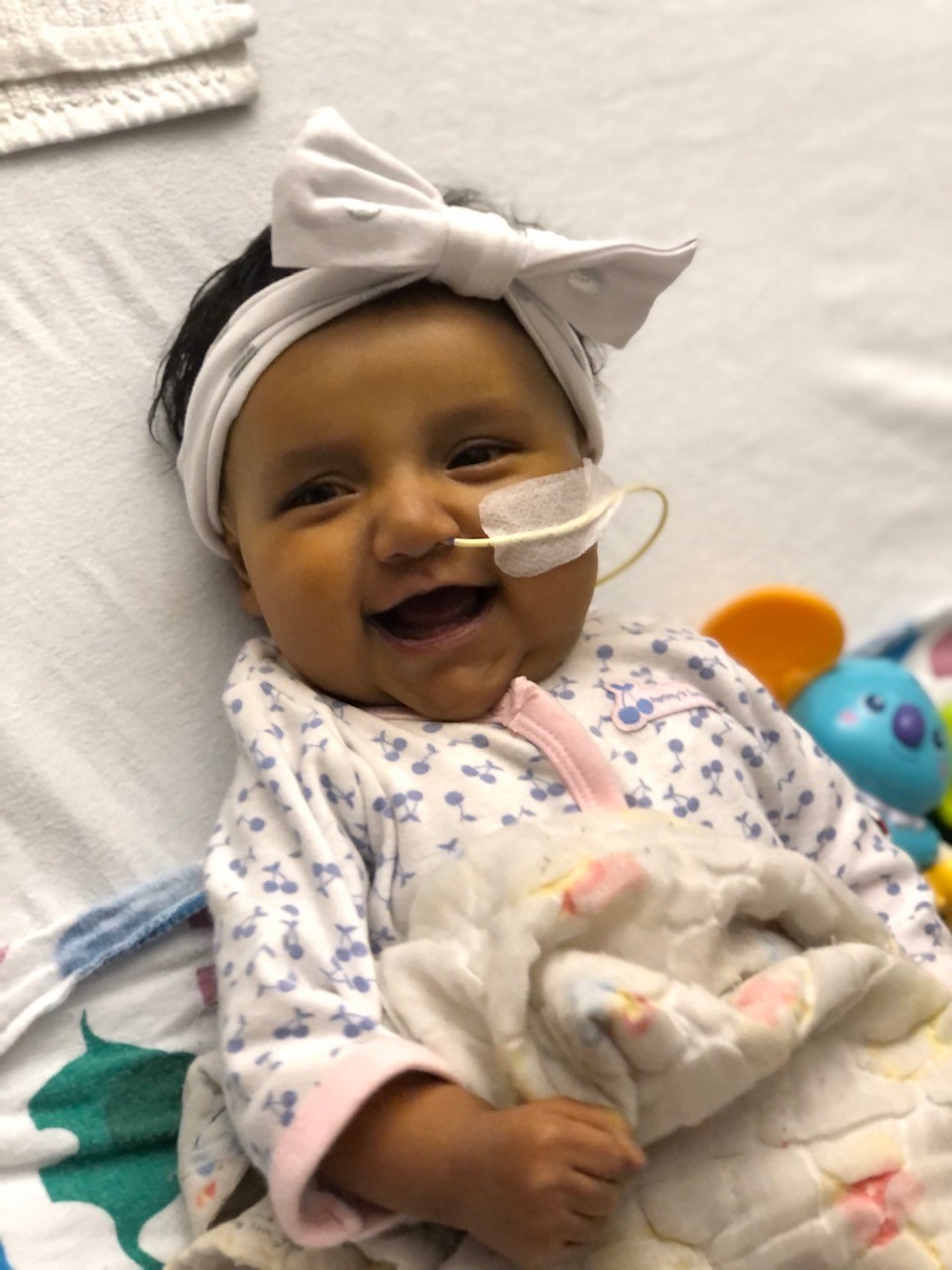 Taking it day by day

When Valarie and her husband brought Delila home, they were anxious about not having all the NICU monitoring equipment there with them. Ultimately, they felt there would be less stress for everyone not having monitors sirening throughout the day and night for pulse, heartrate, oxygen levels, etc. They were taught what physical signs and symptoms to watch for in assessing both heart distress and liver function.

As fragile as Delila is, her two older sisters initially had to adjust to mom and dad’s regular trips to the hospital in Spokane, and then, when she came home, learn how to safely love on their baby sister in the midst of a pandemic.

Valarie feels badly sometimes about all the rules like washing hands before touching Delila and kissing her on the back of her head or her toes instead of her face and hands. She tries to help her older daughters understand Delila’s health problems in kid-friendly ways.

“There are so many things about Alagille that make her care more complex,” said Valarie. 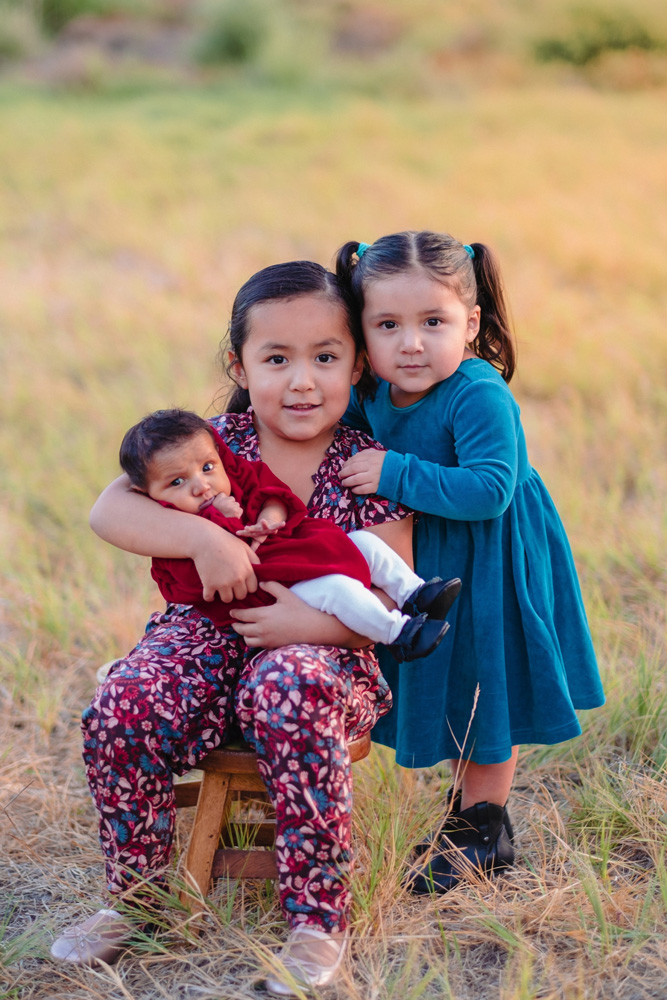 Delila is not able to retain some vitamins because reduced bile flow to the small intestine (due to reduced number of bile ducts) causes problems with digesting fats and absorbing fat-soluble vitamins (vitamins A, D, E and K).

Valarie was sent home with many medications for Delila. “It’s a lot of trial and error because she has a hard time taking some of the vitamins and medicines. One day you think you have all the medicines down, but the next day she’s spitting up all the time. Sometimes you have to just throw your hands up in the air and say, ‘Today wasn’t perfect, but we’ll get back on it tomorrow.’”

Pruritis, caused by reduced bile flow and the buildup of toxins under the skin, can be profoundly uncomfortable. Delila wears mittens to protect her itchy skin from her fingernails. Valarie has met families who have serious challenges with the itching; she feels the medication Delila takes for the pruritis is doing a reasonable job keeping her comfortable, for which she is thankful.

At 11 pounds, seven ounces, and nearly six months old, Delila has had trouble gaining weight. In addition to Alagille syndrome causing slow weight gain, babies with heart conditions must work extra hard to drink. In early December, Valarie and her husband learned how to give her milk directly into her stomach through a feeding pump — 4 ounce feedings, every 4 hours, 24 hours a day.

“I’ve never been so organized in my life,” said Valarie. She described how every ounce and every dose is documented. The family recently returned from seeing Delila’s Alagille and heart specialists at Stanford Children’s Health. Getting on an airplane wasn’t advised because of her oxygen levels so they took a road trip — a feat of logistical planning for Delila as well as childcare for the other two kids. Valarie is grateful for a tremendously supportive family.

Give yourself a little grace

Valarie’s advice to parents with little ones who have serious medical conditions: Take it one day at a time. She described how she used to beat herself up when she was too exhausted to respond immediately to her phone’s every-four-hour reminder for feedings.

“It’s not like everything is going to be perfect. Some days, we’re not going to get all 24 ounces in her, but she is growing; she is gaining weight. The gastroenterologist might not be happy with the numbers, but her weight is going up every week. Just give yourself a little grace.”

“One of the ways I cope is by either writing or sharing about her,” said Valarie. “It helps me process things.” Finding people in support groups on Facebook and in the Alagille Syndrome Alliance (ALGSA) community brings her hope. “It’s just so hard to know what the future looks like, but to know there are adults out there who have it, who are living life, who have careers, families – it’s comforting.”

Other sources of strength are faith and family. “We are both going through this,” Valarie said referring to her husband. “We have really learned to work as a team, communicate, and lean on each other.” Their family is supportive and loving, positive about Delila’s diagnosis, and present when Valarie and her husband need help. “Having our faith to fall back on has been super helpful for us. I know her plans are written for her. And I know that we wouldn’t have been blessed with Delila if God didn’t think we could handle all this.”

“There are hard days, but when you see Delila smiling and laughing – this puts me at peace. I am thankful for every day we have with her.” said Valarie.

January 24 marked the second annual International Alagille Syndrome Awareness Day bringing attention and focus to this rare disease affecting approximately 1 in 30,000 to 45,000 individuals, and to the families affected by it.

If you or your loved one has been diagnosed with Alagille syndrome, find support and resources at Alagille Syndrome Alliance.