Lillie – living with IgA nephropathy, and her mom Carrie, talk about life with rare kidney disease.

Lillie loves to dance. Hip hop, contemporary, ballet and jazz are her favorites. “I like the mixture of being able to be free and to just be graceful,” she shared. “But I also like going crazy and using strong movements.” Dancing is what this 15-year-old would prefer doing over just about everything else.

On Rare Disease Day last year, our team had the privilege of meeting and talking with Lillie and her mom Carrie.

At the time of her visit, Lillie had been off her feet for a few weeks. Complications associated with a medicine Lillie was taking had her spending more time at a podiatrist than her dance studio. But weeks later, she was back on her feet and dancing at the Night Parade at Walt Disney World.

Lillie was diagnosed at 7 years old with IgA nephropathy (IgAN). IgAN is a rare kidney disease that causes immunoglobulin A (IgA), an antibody that helps fight pathogens and infection, to build up in the kidneys. Over time, this can cause inflammation that can affect the kidneys’ ability to filter the blood. IgAN can lead to end-stage renal disease.

“When Lillie was diagnosed the doctor gave us a pamphlet,” Carrie told us. “It was a one-page printout about the disease.” So she began to do research on her own.

She continued, “For families with rare disease that are going through diagnosis, Google can be your best friend and your worst enemy. Look for foundations; look for legitimate resources,” she advised. Carrie’s persistent refrain was to encourage newly diagnosed families to seek out others in the rare community, to gain all the information they can, and be an advocate day-after-day for themselves and their children.

It took a couple of years for the family to find a community. “The best thing about being rare is when you find those people [going through the same thing], you tend to make lifelong friendships – bonds that will never be broken,” said Carrie.

Today, both Lillie and Carrie are active rare disease advocates. Sometimes that means pushing for more research, for participation in clinical trials, and for greater understanding of rare kidney diseases. At Lillie’s school, it means educating her new teachers each semester on how the disease affects her, how she always needs access to water, and the freedom to go to the bathroom. For Carrie, advocating also means serving in volunteer roles at the IgA Nephropathy Foundation of America and at NephCure Kidney International. For Lillie, it means going to Washington, D.C. to talk to US senators and representatives about the Living Donor Protection Act (H.R. 1270) and KidneyX (Kidney Innovation Accelerator).

“We’re always educating,” said Carrie. “We just got a new pediatrician, and like is so often the case with rare disease, we have to educate because she’s not familiar with IgAN. You just have to be your own advocate.”

Carrie and Lillie are quick to praise Lillie’s healthcare provider team. Among this team – which includes a pediatrician, a gastroenterologist, a cardiologist, podiatrists, and many others – Carrie and Lillie are especially grateful for Lillie’s nephrologists.. Even so, Carrie also pointed out, “Sometimes doctors treat the disease. Not the whole person.”

There are no disease-specific treatments at this time for IgAN. And some of the approximately 20 pills that Lillie takes every day to try to stay well and keep her kidneys functioning have side effects.

“I wish doctors would understand that just because they don’t think something is caused by the disease doesn’t mean it’s not,” added Carrie. Lillie experiences stomach upset and flank pain regularly. Many doctors have told them that these symptoms are not associated with the disease. The online IgAN community says otherwise. “The way her kidneys are being treated affects her as a whole, not just her kidneys.”

Reflective and smiling, and grown up beyond her years, and as her mother noted – “a light for everyone she comes into contact with” – Lillie had one final thing to share with us: “There is so much more to me than my disease.”

The Travere Therapeutics team remains grateful for the time Lillie and Carrie spent with us and the honest, vibrant piece of themselves that they shared. 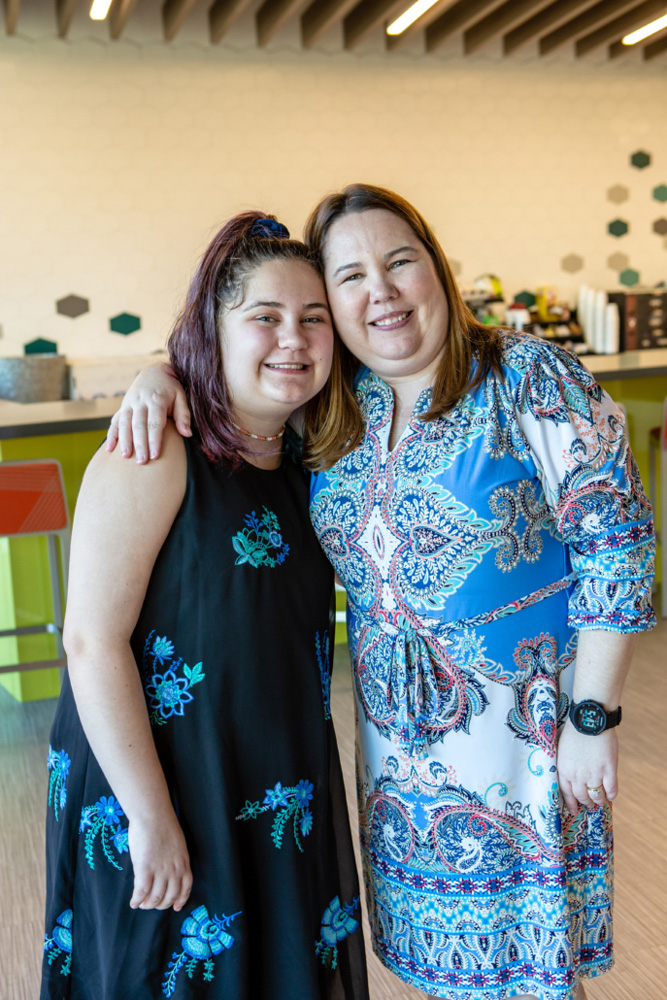